The Story of Am

Amrita, or Am, as she is now fondly called, has always been a loving and responsible daughter.  At five years of age, she asked what “independent” meant, and when she got the answer, she said she wanted to be independent! 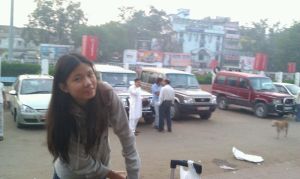 That was around the time she attended kindergarten and was fortunate enough to learn under a very kind and caring teacher named Wendy. Teacher Wendy did not punish or scold her children. She made learning fun. Amrita was the youngest in her class of six-year-olds because she was an avid reader and found reading and writing a breeze, not a challenge. Things went well for her at kindergarten until Teacher Wendy had to leave – she was criticized for not giving enough homework or tests to the children! And the principal kept pressuring her to pressure the kids. And this was suposedly a Montesorri school! So teacher Wendy quit.

We decided to homeshool. We did all sorts of creative learning with the girls: music (piano, violin and lots of singing), dancing (creative dancing, ballet and play dancing), art (nature art, cartooning, lots and lots of doodling), and baking (birthday cakes, cupcakes and cookies).

Homeschooling was so much fun and anyone having so much freedom and fun would’nt think of going back to school. Sam didn’t. But Am did! She actually liked structured learning, schedule, deadlines and yes, homework! ! She liked the idea of going to school everyday to learn with friends. How could we say no to her?

And so, for the first time in her life, she was attending school like everybody else: getting up early to join the morning rush to school, and going to bed late after completing all her homework. It was tough for all of us. But she liked it. And we endured it the best we could. We were prepared to go through this all the way. Until she dropped the next bomb shell on us: she was quiting school to come back to homeschooling!

That was only after two years in school and within those two short years she had amassed medals and awards for all kinds of tests and contests, and being nominated and winning the title Student of the Year!

Her class teacher was clearly annoyed with me as she thought I was the one pulling her out! I tried to explain that it was solely Am’s decision but it was to no.avail. She was convinced I was the culprit behind her quiting! But why would she want to leave when she was on top of the game? We are still puzzled ourselves.

But Amrita is one who always weighs her options before making any decision, (she was never rash or impulsive like her sister) and when she decides on something, we can be assured that she has thoroughly thought it through. So we trusted her in her decision.

The subsequent year was tough on her. She stayed home while all her friends went to school. Having to deschool was not easy, even though she had homeschooled before. We could feel her agony of missing her teachers and friends at school. We could sense her frustrations of not having a predictable time-table to do her work. We even sense a hint of regret in her that she may have made the wrong decision to quit school. But we persevered. We gave her lots of time and space to be by herself in her room upstairs, writing, blogging, reading, dreaming…

It was during this time she picked up the guitar and started to strum in her room all day. This went on for months until one day, she sang us a very nice song, and we asked whose song that was, and she said it was hers – her own, original composition! We said, “Wow! That was good! Do you have any more?” , and she said “Yes.” And we said, “How many?” and she said, “Around a hundred” and we fell off our chairs. “You mean you actually wrote a hundred songs?” and she went, “yeah….but I’m only going to show you one for now.”

That was then, and we are happy to announce that to date, she has shown us FIVE from her collection of a hundred! We figured song-writing and singing with her guitar (which she bought with her own money – being independent, remember?) has been therapeutic for her. She has finally come to terms with herself and her decision. During that time of long solitude (in her room) she discovered her true self and her true passion. Life has a purpose. And she is pursuing her dream that many see as unreachable. And we are supporting her dream even though it may seem unthinkable. But we go by the motto: If we aim for the star, we might land on the moon. Man has already landed on the moon. Let’s now focus on the star!

Amrita is raising funds to get to Nashville in 2012, support her here or come join us at her recital, details on this page

Like Loading...
This entry was posted in Our home schooling experience, Personal, Thoughts and Ideas and tagged Amrita, music, unschooling. Bookmark the permalink.

1 Response to The Story of Am